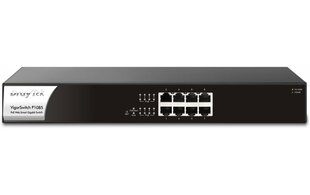 Similar to its counterpart the G1085, the DrayTek VigorSwitch P1085 has the added bonus of being PoE (Power over Ethernet) with PoE device check to enable Ping Watchdog for all PoE devices.

Like the G1085, the VigorSwitch P1085 offers users an ONVIF-friendly switch, with 8 web smart Gigabit ports and an additional 8 PoE capable ports. Containing the DrayTek central switch management software as standard, giving users control over their network with improved security and stability. Allowing for the easy set up of VLAN from the router with centralised hierarchy display and recognition of traffic from Auto surveillance and voice VLAN.

DrayTek routers are supplied with a 2 year manufacturer's warranty as standard.