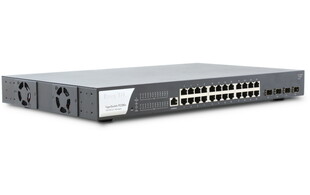 The VigorSwitch P2280X empowers users networks with a high-performance, L2+ Managed Gigabit Ethernet switch. Users can benefit from the 24 PoE+ ports as well as 4 10-Gigabit Ethernet SFP+ ports for greater uplinks to servers or additional switches.

With easy VLAN setup and switch cloning via a router or DrayTek's management system, users are able to get a centralised hierarchy of their switches as well as maintain the network with ease.

DrayTek routers are supplied with a 2 year manufacturer's warranty as standard.