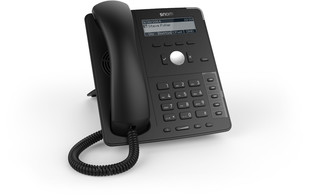 The D715 forms part of Snom's new D7-series of IP phones. This handset supports up to 4 SIP accounts and has a built in two-port Gigabit Ethernet switch for high-speed connectivity. The USB port opens the D715 up to a choice of functionality enhancing features including use of a USB corded headset, connection to the D7 expansion keypad or WiFi. The D715 IP phone features a four-line black and white graphical display, along with four context-sensitive keys and and five programmable keys with built-in LEDs for visual call indication. Along with the rest of the Snom range the D715 has an intuitive, user-friendly menu as well as advanced remote management and provisioning capabilities.

What's in the box